Everybody likes exploring ancient tombs and seeing what the artifacts there may tell us about our ancient ancestors.

We all have an inner Indiana Jones inside us, striving to get out.

Or maybe it’s just me?

Anyway, with the 2019 game Nagaraja from Hurrican games, you can kinda/sorta get that Indiana Jones feel, with your opponent being Belloq! (or, you know, they may feel the reverse, in which case you should revel in your inner-French person). 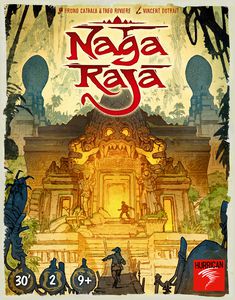 Nagaraja is a new 2-player game where both players are exploring their own tomb (I mean two separate tombs, not their own. That would be very existential).

Just double-checked, and these are temples, not tombs. (Editor – Research is a good thing!)

The game is designed by Bruno Cathala and Théo Rivière with artwork by Vincent Dutrait.

How does it work?

Each temple has a series of relics scattered around the outside edge and players are trying to get path tiles into their temple that will lead them to the relics.

The really cool thing about Nagaraja is that it doesn’t use dice. It uses Fate Sticks.

These Fate Sticks are used to generate Fate Points to see who gets the tile that’s up for selection this turn.

Each player is dealt five cards at the beginning of the game, and they will be secretly choosing one or more cards to show how many Fate Sticks they will throw that turn.

You can choose one or more cards for this, but they have to have matching symbols in the top corners. They can’t be different.

Both players reveal their cards, take their Fate Sticks in hand, and throw them. Whoever has the most pips showing will get the tile.

However, what are those squiggly lines? 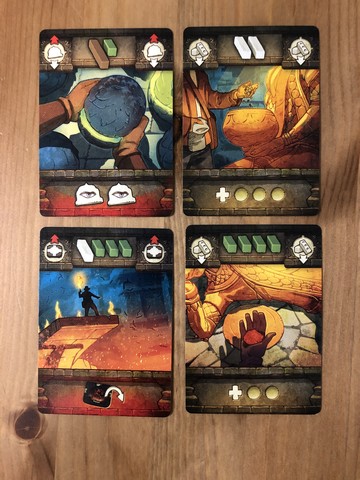 Including adding extra pips to your roll like the cards on the right side above.

Whoever has the most pips wins the tile and places it in their temple, attempting to connect one of the three entrances at the bottom to the various relics. 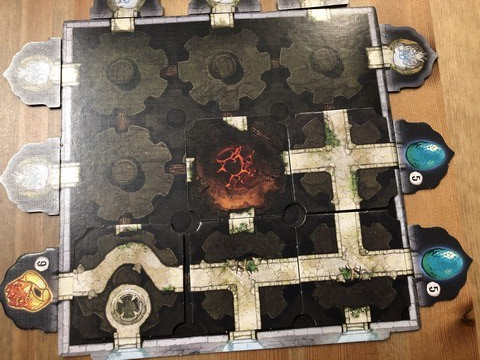 When a path to a relic is complete, the player flips it over. If a tile ever rotates or moves so that there is no longer a path to that relic, then it gets flipped back.

As soon as a player has 25 points worth of relics flipped over (the 25 points can include any amulets that they’ve discovered which can be one or two points each), they win!

But there’s a catch.

See the 6-point relics? It’s great if you flip over two of them. That’s 12 points right there! Surely three of them giving you 18 points is a great thing, right?

The 6-point relics are cursed relics. Having one or two is fine and can contribute to your points greatly.

But flip over all three of them, and you automatically lose the game.

The other way for the game to end is as soon as somebody places their 9th tile. If nobody has won/lost by the above method, than each player adds up their points and whoever has the most is the winner.

Whoever doesn’t get the tile each turn will draw three cards, choose two of them to keep and give one of them to the other player.

Keep going until somebody wins! Or somebody loses.

Is Nagaraja a Rosetta Stone that will unlock the mysteries of past civilizations? Or will it be a hoax perpetrated on the scientific community?

I really enjoyed Nagaraja. It’s quick, it looks really great on the table, and it’s fun to play.

The fate sticks are super cool (let’s just put that picture in again so you don’t have to scroll up) and a nice alternative to regular dice. You kind of feel like you’re tossing runes, except you’re not in some Viking village but instead in the depths of the South American jungle.

The tiles are thick cardboard and really ancient temple-like. It does really look like a deep cave with paths going to the varied relics (though thematically I’m not sure how moving and rotating tiles works, it definitely works in the game to help you or screw your opponent! 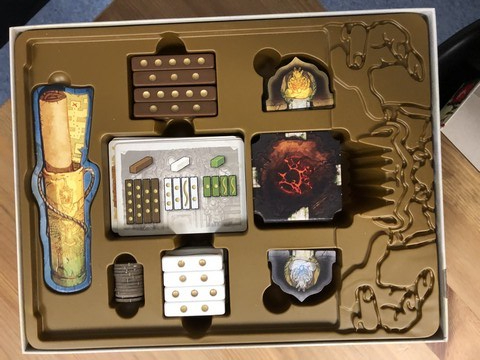 And I have to say that the insert for this game is brilliant. Everything has its place and fits perfectly. It also looks pretty thematic too (and kinda creepy, but that’s ok).

Of course, if they ever make an expansion to this, the insert will have to go right out, but I don’t really see the need for one.

It’s a fine balance between playing your cards for the Fate Sticks and playing them for the effect. If you keep winning tiles, you could run out of cards pretty quickly.

The “flip 3 cursed relics and you lose” mechanic isn’t the most threatening. In our four games, nobody even came close to doing that. But it is a theoretical possibility if they just happen to land right.

And the fact that you can manipulate the tiles or relics in your temple (or even in your opponent’s temple!) is really pretty cool too. That can certainly make somebody lose with three cursed relics, if their opponent plays their cards right.

Say your opponent has two cursed relics exposed already, along with another one as well. Use a naga to play a card to look at two of your opponent’s relics. Then use another naga to switch that cursed relic you discovered with the non-cursed one that’s already been revealed.

I don’t think we really maximized the “mess with the other player” cards in our plays, other than when somebody was just about to win. As you play it more, you’re more willing to be a jerk about messing up all of their plans and hiding their cool relics again.

The variability in the game comes in the placement of the relics, the amulets that you might find on a certain tile that you win and connect to in your temple, and the tiles that come out.

Everybody loves the cross paths tiles but the T-intersections and the other ones that only have one path across the tile can become annoying after a while.

But that’s where the fun and the decision-making comes in.

Each tile that comes up for taking, you have to make a few decisions.

Do I have the cards to give me the right amount of fate sticks for this? You always have to put up at least one card, so you can’t just pass.

Do I really want that tile? Will it fit nicely into my tomb?

Will it benefit my opponent?

Do I need to just bid one card so that I can get more cards and fill up my hand more because it’s almost empty?

Do I want to roll fate sticks with nagas on them so I can play other cards?

A lot of decisions for a basic, quick game!

It’s that push and pull mechanic that I really enjoy about Nagaraja.

There are a couple of downsides to the game, however nothing too major.

While there are a lot of ways you can mitigate it, luck can really hose you in the game if you’re not careful. You do have to watch yourself so that your hand doesn’t get too small, but sometimes the timing is just terrible for when you don’t have a lot of card options (say you don’t have two cards with the same symbols to really make sure you have the right fate sticks to get that 4-way intersection).

Also, even with the variability of the relics, the tiles, and the cards, you are essentially doing the same thing each game so it can become a bit samey after a while.

We played the game four times in quick succession and while I still enjoyed it, I did feel the need to give it a rest for a little while.

All of that being said, I think Nagaraja will remain a staple in our lunch time library for a long time to come. There’s something to be said for a game that you can play twice on your lunch break and still have it remain fun.

And how can you go wrong with a game about unearthing ancient relics?

Next time, the ancient relic we unearth will be that thing that’s growing in the office fridge.

(This review was written after 4 plays)

← App Review – Neo Cab
Tekhenu: Obelisk of the Sun from Board & Dice →

Looking forward to trying out this great-looking deduction game! @renegade_game_studios @playfoxtrotgames
This one made it here recently too! @czech_games_edition #boardgames
More recent acquisitions, this time from @renegade_game_studios @direwolf and @playfoxtrotgames
Look what arrived yesterday! @gmtgames @reposproduction @thamesandkosmos
All my games finally arrived! What should we play first? @alderaceg @fantasyflightgames @space_cowboys_officiel @boardanddice @strongholdgames @blackforeststudio @artanagames #boardgames
Early in a game of Watergate and Mitchell’s already betrayed Nixon! Great game by @capstone_games ! #boardgames #tw