One of the great appeals of board games is the social aspect. You’re sitting around the table with a bunch of friends (or maybe not so much friends as “somebody from the group who I don’t know but who has agreed to play this game”), playing a game but also getting some social time in. You’re communicating with somebody who isn’t just something posted on your Facebook page.

There’s something to be said for physical contact (and by that I don’t mean just touching, but also inhabiting the same space as somebody and talking by using your mouth and not your keyboard).

But what happens if one of your gaming buddies moves across the continent? What if you have some friends on Boardgame Geek, but you’re in California and they’re in Great Britain?

That’s when gaming online can be such a godsend.

Castles of Burgundy, Takenoko, The Voyages of Marco Polo, and so many other games are available to be played online, either asynchronously or live.

(The Castles of Burgundy, in case you don’t read German and it’s not otherwise obvious)

Playing board games online can be very convenient. You can play at any time, either against friends or against others who are in the “lobby” waiting for people to join the game they’ve set up.

On most sites, you can play either live with a timer (you sit in front of your computer until the game is done) or asynchronously (you log in, take your turn, and then go away, coming back later).

We all lead busy lives. Sometimes it’s a wonder that any of us have time to get together and enjoy a 4-hour game against your friends. Especially when kids are involved (so I’ve heard).

Asynchronous play helps with that, as you are not tied down. Some of the best board game apps on mobile devices work the same way.

But if you’re in the mood for a live game, you can usually find one on one of these sites.

Here are the three I’m the most familiar with, though I know there are a couple more (and some games have a dedicated site to playing them).

All three of them are free, though you obviously get bonuses if you subscribe.

Boardgame Arena – This is the first site I ever joined, due to a couple of my friends wanting to play Through the Ages with me. It has a very good interface and some of the games have the “undo” feature which will let you replay your move if you screw something up.

The one bad feature of many of the games on Boardgame Arena is that no only is there no “undo,” but there is no check to make sure you haven’t made a mistake. Many games (Takenoko, to name just one bad example), if you click on the wrong thing, then sorry. Your move is already made. No going back!

However, they keep adding games all the time and they have a bunch of good ones already.

Games I play regularly on there are Through the Ages, Takenoko, Seasons, Puerto Rico, Troyes, Tokaido, and I’ve just started playing Russian Railroads. There are tons more that I haven’t played, however.

Membership gets you the ability to start games on some of the new ones when they’re first on the site. It also adds a bunch of statistical information that you don’t get with the free account. 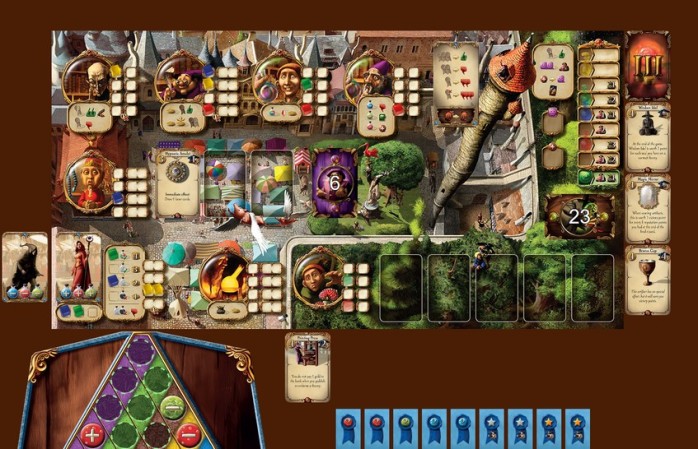 This is by far my favourite one, because it has some of my favourite games on it. I just played Deus for the first time on the table, and discovered that it’s in the library on BJX! Very excited about that, if I can get a few friends to try it out.

The interface is pretty easy to use, though it’s not quite as intuitive as Boardgame Arena. Once you figure it out, though, you’ll have no problems and you’ll be navigating all over with ease.

The most important feature, however, is the confirmation request for every move. I haven’t seen a game that hasn’t had this. For games with cards, it asks you if you’re sure before revealing new ones so that you can’t cheat. For Concordia, for example, if you buy cards, it doesn’t show you the new cards until you’ve confirmed your move.

This is a life-saving feature many times, especially when you’re learning a game and still not sure of your moves and what effect they will have.

There is no “undo” feature, but with the confirmation request, that’s just as well.

There are so many good games on the site that it’s hard to choose from them all. However, the games I play here are Alchemists, Castles of Burgundy, Tzolkin: the Mayan Calendar, Concordia, and I’ve played Kanban, Dungeon Lords, and Myrmes.

Membership gets you some stats, the ability to make notes to yourself for future turns (good thing in asynchronous games), autorefresh so if your turn comes up it will tell you, you can have more games going (you’re limited to 20 as a free member), and much more. 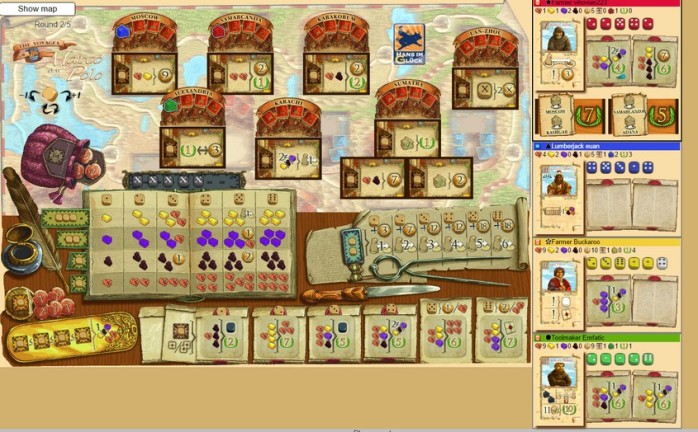 (The Voyages of Marco Polo on Yucata)

I came to Yucata really late because I really wasn’t looking for another site to play games on.

However, a friend wanted to play The Voyages of Marco Polo and this was the only site that had it.

Once I went exploring, I found a bunch of games that I really enjoy that aren’t available anywhere else.

The interface isn’t as intuitive as I would like, and I do find myself making mistakes more often here than the other two sites.

Thankfully, Yucata has the “undo” feature on all of the games (or at least the ones I’ve played). If you make a mistake, you can either undo your whole turn or just the last move you made. It’s really handy, and has saved my ass a bunch of times.

It also has a “finish your turn” button, which gives you a chance to make sure you’ve done everything correctly before doing it. Unlike BGA, it doesn’t just go on to the next turn. It took me a little while to get used to this, as a couple of times I went away and when I came back, I discovered I hadn’t hit “finish my turn.”

Games I play on Yucata are Automobiles, The Voyages of Marco Polo, Castles of Burgundy: the Card Game, Thunderstone, and Balloon Cup.

Yucata doesn’t have any membership bonuses. They do encourage you to donate and support them, but there are no extra benefits for doing so (at least not that I could see).

However, they have a great site, so a donation is certainly a good thing!

I’m whovian223 on all three sites. Why not hit me up for a game if you’d like? I only play asynchronously online, though.

18 Comments on “Playing Board Games Online”