Earlier today, I posted a review of Century: Spice Road, the 2017 spice-converting card game by Plan B Games.

A new version of this game has just come out in the past couple of months, called Century: Golem Edition, with art by Justin Chan and Chris Quilliams.

The gameplay is exactly the same between the two games. The only differences are in the aesthetics and the artwork.

In Century: Golem Edition, instead of being medieval spice traders collecting spices to fulfill contracts, you are instead collecting and transforming crystals in order to power golems.

Instead of wooden cubes, you have nice plastic crystals instead. 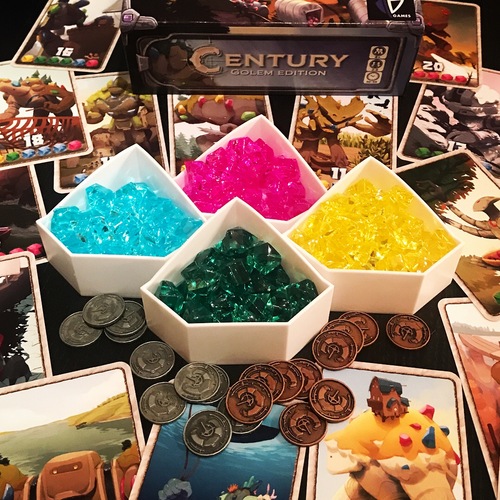 Everything else is the same!

So which version should you get?

Personally, I love the look and feel of the Golem edition. The nice plastic crystals definitely feel better (and are easier to handle) than the small wooden cubes. The artwork is adorable too.

That being said, there are supposedly going to be more games in the “Century” line. I’m not sure what those games are going to be or whether they are going to have similar artwork.

It has been said that there will not be Golem version of those games, so your components may not be aligned when you get future games.

Either way, if that concerns you, you should definitely get the original version. It’s also not really worth upgrading if you already have the first game (unless you are a loving collector of art and must have the best artwork).

But if you have a choice, I would definitely suggest the Golem version of the game.

What are your thoughts?

Join 1,574 other followers
Follow Dude! Take Your Turn! on WordPress.com