Q & A – Gil Hova – Designer of The Networks and more

Gil Hova is a man of many talents. Prolific and one of my favourite game designers, game publisher (Formal Ferret Games, where he self-publishes his games now), podcaster, all over Boardgame Geek answering questions about his games, social media star (may be an exaggeration, but I am an avid follower of his Twitter account), and probably much else as well.

Now I can also say that he’s an incredibly nice man. He’s always come across that way, of course, but he proved it when he agreed to do a Q & A for me during a very busy time. I’m very appreciative of the time he took to answer my questions.

I know what you’re thinking. “Dave, he has a new project on Kickstarter. Of course he wants the publicity.”

Considering how small and starting out this blog is, I’m sure he could easily find other outlets to get the word out.

Before getting into the Q & A, though, I do want to mention that the expansion for his game, The Networks, is now on Kickstarter, and I encourage you to check it out. It’s called The Executives, and it sounds amazing.

So without further adieu, let’s see what Gil has to say!

1) Where did the idea of The Networks come from? What attracted you to the theme of it? Especially since, if I remember an earlier post from you correctly, you aren’t much of a TV watcher?

The Networks was a mechanism-first game. I had an existing game called MacGuffin Market that I needed to retheme, and running a TV network turned out to be a perfect theme. A lot of people ask designers whether it’s better to start with theme or mechanism, and I don’t think either one is better than the other. You should find the best join of theme and mechanism, but you can find that join coming from either direction.

I’m not a huge fan of TV, that’s right. Truth be told, I usually hate to be in the same room as a blaring TV!

For the expansion campaign, I haven’t been surprised by the response, as people have been really excited about it for some time. I’d say it started better than my expectations, and now the “valley” (the dead time between project launch and conclusion) has been a little slower than I expected.

I am extremely grateful, all told, and I’m really excited to deliver this expansion! It adds a ton to the game.

I was blown away by the reaction to the original Kickstarter. I didn’t expect to raise over $100K! That literally changed my life.

3) When you are coming up with a game to design, what is usually the first thing you think of? Mechanics you’d like to use? The theme? Something else?

These days, I start with a setting or a scenario. Not really a theme, but more specific. Then I think about the kind of feelings the players should have when playing the game. That directs me to what kinds of mechanisms to use.

Sometimes I start with mechanisms. That seems to be harder for me, but like I said before, it’s not a worse way to go.

But the important thing, especially early on, is to keep in mind what I want the experience to be, and what the game’s soul wants to be. Or, if I find early on that players are really responding to another element of the game, to pivot and bring that experience out instead. I want all those big, seismic changes to happen early on, so that I don’t have too much invested in a bit of the game that must radically change or be cut altogether.

This process has helped me a lot lately. I designed Bad Medicine in just under a year; it would have taken me several years when I was just starting, because I would have spent at least two years trying to make it a light tactical game!

4) Wordsy sounds like a unique type of word game where you aren’t necessarily tied to the letters that are available. Do you generally like word games? How did you come up with this concept?

Oh, I used to hate word games! I hated how they limited me to a small set of letters; I’m always one or two letters away from an amazing word. There was a word game that was popular at a local convention circuit that I will not name (it wasn’t Scrabble) that had some truly awful game design decisions, and I figured: if this game has fans, how hard can it be to make a word game?

That was 2007, and my first published game, the word game Prolix, came out from Z-Man in 2010. In that process, I played a ton of word games, and realized I liked more than I thought. And of course, since Prolix, we have games like Paperback and Letter Tycoon that have revitalized the word game genre.

Wordsy is a re-implementation and streamlining of Prolix, and I’m quite proud of it. I think it’s the word game I’ve always wanted to play. 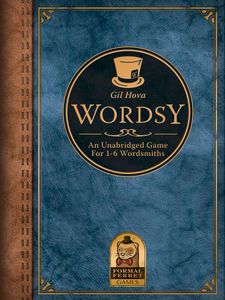 5) You recently joined the Ludology podcast, and also have a podcast called Breaking Into Boardgames. What do you find appealing about podcasting, especially about board games?

I think it’s a great way to connect with other game fans, both in terms of creating and listening to podcasts. I’ve met a bunch of wonderful people through podcasts.

I also have a background in sound engineering and editing, so I found myself in a position to really help a bunch of podcasts. I think on the whole, Ludology and Breaking Into Board Games sound really good, and I hope that makes them more appealing to listeners.

6) Finally, I have to ask: what is your favourite game that you have had no involvement with?

I have a hard time picking favorites! It really depends on the day and how I’m feeling. Puerto Rico got me into the hobby and taught me what a board game was capable of doing. Terra Mystica is three hours of crunchy planning that always winds up feeling like 30 minutes. Brass is three games mixed into one, and you have to play all three to win. De Vulgari Eloquentia combines intricate mechanisms with a wonderfully peculiar theme, and lets players make choices that lead them down wildly different paths.

And this is just board games! Looking outside the board game space, I love Fiasco, InSpectres, The Shab-Al-Hiri Roach, Portal, Howling Dogs, and Out of the Park Baseball (which I don’t allow myself to play, because that’s all I’d do).

Thanks so much to Gil for taking the time to answer these questions in the middle of a hugely busy time for him. I really appreciate it!

You can thank him by doing what I’ve already done, and backing The Executives on Kickstarter. And if you don’t have the base game, back it to the level to get the base game too.

← Temple Gates Continuing Their Mobile Assault on the Galaxy
Through the Ages App Finally Released! →