Sometimes you just need a little tranquility in your life. Your day at work was terrible. The kids are getting on your nerves.

Zombies are rampaging down the street.

You know, a typical Monday.

On days like that, you need a game that’s peaceful, that will contribute to your inner Zen.

On those days, you’ll pick up your mobile device and open the Lotus app.

In Lotus, you are playing “flower petal” cards in order to grow complete flowers and (it is a game, you know) score points with them.

You start with a deck of 31 petal cards, and will always have 4 in hand (though you can choose a bonus to let you have 5 cards). The petal cards run 3-7, and have a number of insect guardian icons on them.

On your turn, you can do two actions, and an action can be done twice.

Each flower consists of a number of petals equal to the number on the cards. So you have flowers with three petals, four petals, up to seven petals.

Each of your cards has a guardian symbol on it, either one or two of them. Whoever plays the final card to complete a flower will get points equal to the number of petals, as well as one of the bonuses if they have control of the flower.

However, if the other player has the most guardians on that flower (either from cards played or from playing a Guardian there), then that player has control and will  get the bonus.

If you already have all three of the other bonuses, you’ll automatically get the “+5 points” bonus.

After taking your two actions, you’ll draw back up to 4 cards (or 5 cards if you have the Enlightened Path bonus). You can either choose from your deck or from the “wildflower” cards shown on the left side of the screen.

The benefit of those cards is that you know what you’re getting. The bad thing about them is that they have no Guardians on them.

Play continues until one player’s deck is empty. After that, each player gets one more turn.

Then, each incomplete flower is scored for the player who has control (most guardians) of the flower, gaining one point for each petal that is on it. If there is a tie for control, then each tied player gets an even share of the petals and the remainder are discarded.

Never having played Lotus on the tabletop, I can’t comment on how it looks when played face to face.

But the app is gorgeous. 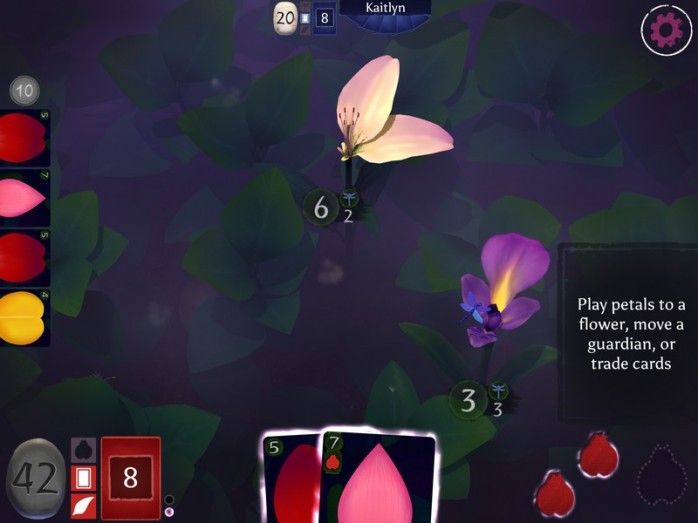 Vivid colours, really easy-to-use interface where you just drag the glowing cards out onto the board. The app decides where the flower goes.

You can see clearly next to your deck which bonus you have, and tapping it will give you the name of it (I couldn’t get it to actually pop up again, but it’s really easy to remember what they are).

There’s a clear indication of who has the most guardians on a flower, with icons next to each other. You’re never in doubt.

The game is really easy to pick up and play, though the tutorial is quite nice, covering all of the concepts you need to know.

There are three levels of AI. I’ve only played against the Medium, but it wasn’t that hard to beat it after a game or two. I thought they were really hard-fought games until I played my first two multi-player games and had my ass handed to me. The AI can give you a bit of a challenge, except for the Easy one of course (and isn’t that the point of “Easy” anyway?)

Speaking of multiplayer, it’s asynchronous with friends online, pass and play, or you can play ranked games. It’s quick enough that you shouldn’t have random opponents leaving the game before it’s finished, though who knows with people out there on the Internet. 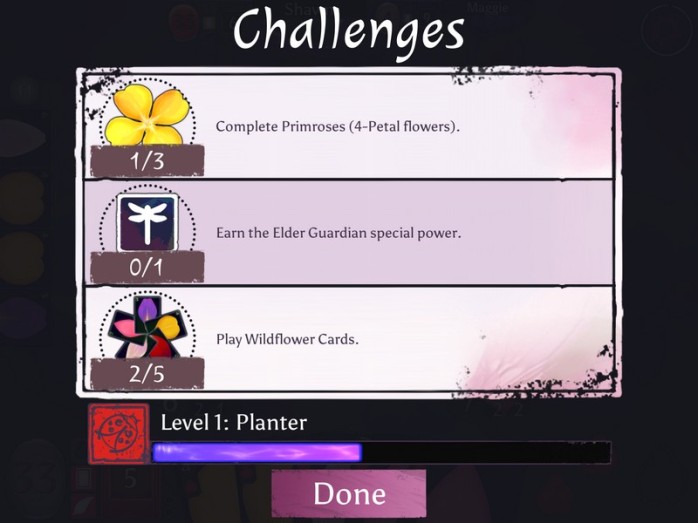 There are also Challenges, for those of you who must have an ongoing reason to play a game other than the fact that it’s fun.

The music is peaceful, like you are at a true lotus pond. I don’t play with music on much, but I did listen to this one for a bit and it doesn’t wear out its welcome.

The app is very polished, with no real deficiencies that I can see. I didn’t encounter any bugs (pun unintended) and it was just a wonderfully Zen experience playing the game.

The game itself may be too simple to last long, unless you put it away for longer periods. It’s a nice little card game, good in a pinch but it doesn’t have a lot of staying power. 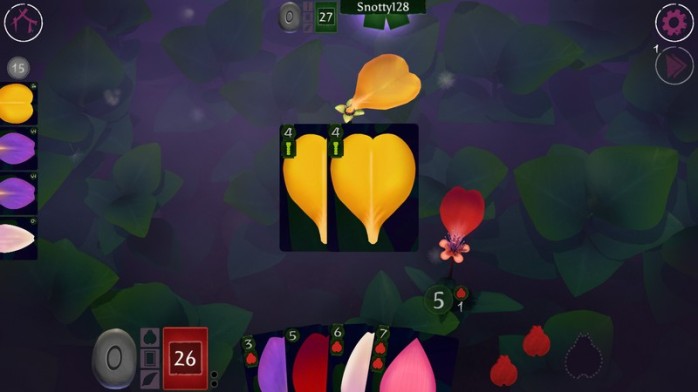 At the table, if everybody wants to play a card game, I can think of better ones to play. I certainly wouldn’t turn it down, though. It’s very enjoyable, and may give you that Zen feeling on the table as well.

As for an app experience, it’s perfect if you are needing that inner peace and just want to lie back and relax, feeling the peacefulness of the lotus pond washing over you.

Which can be especially useful if you need a break from the zombie horde outside your door.

Lotus is available on iOS and Android devices, currently for $5 US ($6.50 for us Canadians)

← Oh no! There are women on the Dice Tower!
How to Succeed at Boardgames…and Life →