(Editor’s Note: Apparently there is conflicting information about whether Hanamikoji was a capital at any point. I took my description below directly from the BGG site for the game, but other information seems to contradict that.)

Like any honest businessperson, we would all want to attract as many customers as we could to our shop.

In Japan in the olden days, in the old capital of Hanamikoji (why do I keep forgetting the “j” in that name?), there was a Geisha street where geisha plied their trade. They were graceful women who had mastered the art of dance, art, music, and various performances. It was very prestigious to attract the most talented geisha to your establishment to entertain your clients.

Thus, of course, competition for their favours was born.

So hey, let’s make a game out of that! 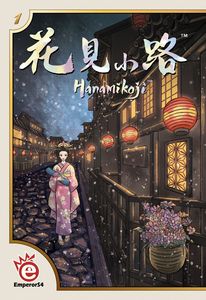 In Hanamikoji, two players vie for the favour of seven Geisha Masters.

Designed by Koto Nakayama with gorgeous art by Maisherly, this game is beautiful to look at and a lot of fun to play. It’s published by EmperorS4 and Kosmos, with the original edition being published in 2013. I believe it made it over to North America in 2017 via Kosmos, but I’m not 100% sure on that one.

This game was an honourable mention in my Best Games played in 2017 list, and I did a complete rundown of how to play it there, so I’ll just be lazy and copy/paste it.

Each round, you have four actions you can take, and you can only do each one once. Cards in the deck represent items that each Geisha likes and uses.

Two of the four will give some benefit to your opponent, so you need to figure out what works best for you.

That’s it. At the end of the round, you move the influence marker on each Geisha towards the player who played the most cards on that Geisha.

If a player has influenced four Geisha or 11 (or more) Charm Points worth of Geisha, they win! Otherwise, begin another round, keeping the influence markers where they are. They will never move back to the center, though they can change sides.

Is Hanamikoji a beautiful work of dance, or is it an over-caffeinated teenager at Prom?

It’s probably one of the best 2-player games I’ve played. I love the sometimes incredibly hard decisions you have to make, based on the cards in your hand.

Two of the four actions directly benefit your opponent, so how do you minimize that? You have to give up something, but what will it be?

It can be agonizing.

The theme is, of course, very pasted on. The only reason for the geisha theme is to justify the absolutely stunning artwork on the cards. The colours are vivid, each object fits with the geisha that it’s attached to. It’s a beautiful game to look at.

Which brings me to the components in general.

The cards are pretty good stock, though sleeving is definitely not a bad idea because this game is quick enough to be played a lot. You’ll only be shuffling the cards once or twice each game, but you will be picking them up a lot. Your mileage may vary on whether or not you should sleeve.

The action tokens are fairly thick cardboard, but the influence tokens are a bit less sturdy, though they’re still beautiful.

Gameplay is very quick. Each round will probably take 10 minutes at most, and it could easily end in one round. Yet for such a quick game, it is a compelling play. As I said above, the decisions are really juicy. Especially when you draw one of the “5” cards on your last action, and it’s the action where you take two cards out of the game.

Thus, there’s a bit of planning to take into account too.

It’s not a deep game, though. It’s very tactical in nature. Which is not a bad thing.

It’s the perfect filler game for when you have a spare few minutes with one other person, like I used it for recently. Two of us were waiting for the rest of the group to finish their game, and we needed something quick rather than just sitting around.

I love this game and may actually pick it up one day. The main reasons I haven’t are because I don’t get 2-player games to the table that often, and when I want to play it, my friend has it.

That may change, but in the meantime, I highly recommend this game

(This review was written after 5 plays of the game)

Join 1,568 other followers
Follow Dude! Take Your Turn! on WordPress.com