A while back,  I reported that Temple Gates, developer of the wonderful Race for the Galaxy and Shards of Infinity apps (the latter of which a review is coming soon!), was going to be rolling out the beta for the app version of Roll for the Galaxy, the dice version of Tom Lehmann’s classic card game.

(Is that enough links in the first paragraph? Should I do more?)

I’ve been in it since Friday night (May 29) and I’ve been monkeying around with it all weekend, both in multiplayer and single-player games against the AI.

How well is it going right off the bat?

I explained a bit of how to play the game in my recent BGG Top 100 post that included the game, so I’m not going to repeat myself here. Go check that out if you want a quick overview.

But basically you are rolling dice, some of which may be different colours to match the types of things they represent (red=military, brown=rare elements, yellow=alien, etc). Others are white “home” dice.

You secretly assign what you’ve rolled to the various actions you can take, and then you go from there. 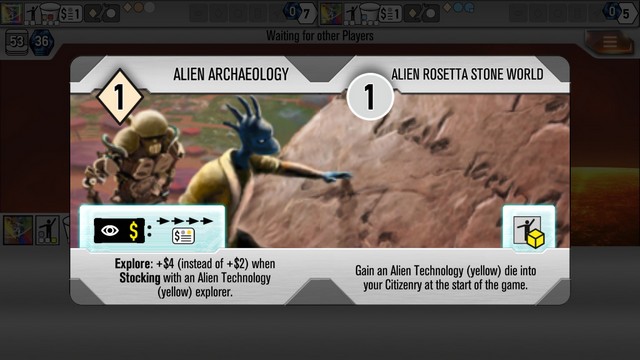 I really do like the game, even though I haven’t had the chance to play it in quite a while. I have to rectify that soon, but the app is sating my appetite for it for the time being.

What does the app have?

Let’s quote from the announcement (because it’s Monday and I’m lazy):

First, the AI is very well done (it’s by Keldon Jones, so of course it is). I’ve played a few games against it and haven’t won yet. There are 3 levels of AI and I’ve only played Medium (there’s also Easy and Hard)

The asynchronous multiplayer works just as good as it does in Shards of Infinity and Race for the Galaxy, with the exception of one bug that was keeping me from adding friends on my friends list to a game invite.

When the game first loaded up on Friday, we could only invite players to a game who were on the first page of our Friends List. Now with the new updates, I can’t seem to add anybody (just one person for some reason).

Temple Gates has said that this is because the greyed-out friends are Shards of Infinity friends and either don’t have Roll for the Galaxy or haven’t verified their addresses. However, I’m in games with a bunch of these players, so I’m not sure if that’s the case (unless they could invite me because I’ve already verified my address? Not sure).

So there are a few kinks in the works, but I am in three games and it’s working beautifully once you’re in a game.

There’s also no indication of which player is which unless you click on their empire and have it expand.

The game itself is beautiful, though.

It just has that Temple Gates look.

The game is missing a tutorial (which they say is coming), but the interface is very intuitive as long as you know the game. If you don’t know the game, there is a rules section as well as online rules and a PDF of the game’s rules. You should be ok as long as you don’t mind learning rules by reading.

As somebody who has played the game before (though not for a while so I was a bit rusty), it was clear exactly what I needed to do on each phase (though the dictating of a die face took a bit of time to suss out). 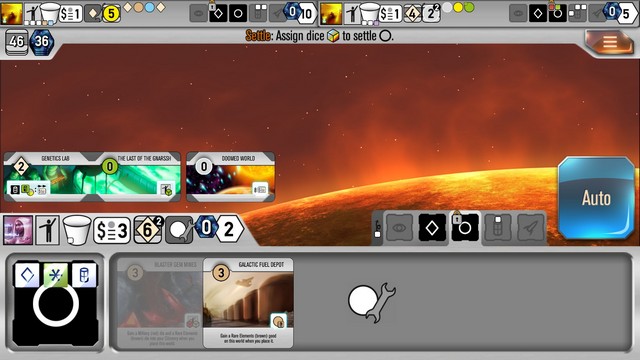 I like that it gives you the “Auto” option when distributing dice in case there are obvious choices (above, I have 3 dice in Settle and a 3-die planet to settle, there are no choices there). The same goes when you are deciding what dice to buy back to put in your cup in the Manage Empire phase. If they’re all white dice, why choose? Just have it automatically do it.

So the “Auto” option is cool. 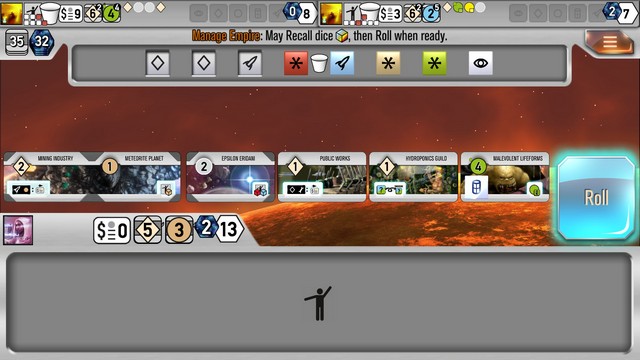 Looking at these screen shots, I love how the tiles you have but haven’t built yet are shown next to the money you have. In the above shot, you can see I have a 5-cost development on one side and a 3-cost planet on the other.

If you have more than one tile in a stack, a black number will appear in the top corner of the appropriate stack telling you how many tiles you have in it (like the two players in my game above).

If you have dice already assigned to a tile, it will show those too.

I also really like how the interface tells you which actions each player has dice on and which ones have actually been locked in (which means they’re definitely happening).

The locked actions are in black while the ones that aren’t happening are greyed out.

Your points are easily visible (probably more so than in the board game itself), including how many victory point chits you have. Your empire is clearly visible on the screen but you can zoom out a particular tile if you want to see its effects.

If you want to see what an opponent has in their empire, just click on their picture.

I know the Boardgame Geek thread that Temple Gates is using for bug reports shows a number of outstanding issues, but thankfully I haven’t encountered anything that’s been really game-breaking, with one exception.

Don’t click on a planet/development to zoom it out in the middle of dice rolling.

That was fun (I wish I could have taken a screen shot of that).

I was able to close the app and re-open it and resume the game, so that wasn’t bad.

I think there are some issues with some individual tiles, but I haven’t run into them yet.

Overall, I’d say Roll for the Galaxy will be yet another winner for Temple Gates.

And at least for the moment, you can still join the Beta! Just go here and fill out the form.

I don’t know how many more they’ll be taking or when the Beta will be over (at least it’s not just 4 days!), but the more players that get in, the better.

Are you in the Beta? What are your impressions so far.

Or are you a fan of the game and can’t wait for this to come out?

3 Comments on “Roll for the Galaxy – App Beta First Impressions”