Review – The Fox in the Forest

I’m a big fan of trick-taking games, most especially the wonderful game Diamonds.

But what happens when you’re sitting there with only one person, trying to figure out what game to play? You’re both fans of trick-taking games, but there are only two of you. No trick-taking games work with two.

What can you do? 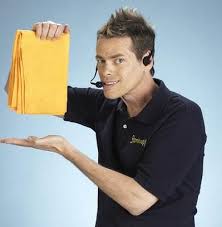 Suddenly, an annoying-looking man appears with a Shamwow. And with a game that will suit your needs!

That game would be The Fox in the Forest, designed by Joshua Buergel, with art by Jennifer L. Meyer and Keith Pishnery, and published by Foxtrot Games and Renegade Game Studios. It was published in 2017.

Let’s see how it works.

First, I have to say that the rulebook does a wonderful job of explaining what a trick-taking game is, for those of you who aren’t sure. I’m not going to bog down the review to explain it all, but the rules (pdf) are great.

The Fox in the Forest comes with 33 cards (three suits of eleven cards each), two scoring cards, and a bunch of scoring markers in denominations of 1, 3, and 6.

The dealer will deal each player thirteen cards and then turn over the top card of the pile that’s left. This is the “Decree” suit (otherwise known as trump).

Who wins the trick?

If the second player didn’t play a card of the same suit, then the lead player will win the trick.

Unless the second player laid down a card of the same suit as the decree card, in which case that player wins the trick.

The thing is, The Fox in the Forest adds a bit of a twist to all of that.

All of the odd-numbered cards have a special ability. For example, if only one 9 is played, then that card is considered the same suit as the decree card, even if it’s not. If you lead an 11, then the other player is forced to either play the 1 of that suit or play their highest card in that suit. They don’t get to choose.

A fox (3) will allow that player to exchange the decree card with a card in their hand. That could mean the decree suit will change as well, making the card they just played a trump card even though it wouldn’t have been otherwise.

Why does this all matter, when you’re just trying to take as many tricks as possible?

Because you’re not doing that. You want to get a large number of tricks, but you don’t want to get too greedy.

You have to manage the number of tricks you take. If you take 10 or more tricks, you actually will get zero points and your opponent will get six!

At the end of the round, each player counts tricks and takes the appropriate number of score tokens as shown above.

When a player reaches 21 points, they win! Otherwise, start a new round with the other player dealing.

Is The Fox in the Forest covered in silky fur that will make a great picture? Or is it a brambly mess that could use a bath?

First, once again I have to give kudos to the rulebook. Not only does it explain what a trick-taking game is, but the rules themselves are clear and concise. While there is an FAQ for the odd-card abilities, I didn’t really find it that necessary.

Secondly, the cards are beautiful. The artwork is stellar, with a nice, peaceful, foresty look to them (Editor: Dave likes making up words). You can almost hear the insects making their nature sounds as you see a sleek-looking fox peering at you from between two bushes.

The cards are well-made and should be able to handle some shuffling. The scoring chits are sturdy and nice-looking as well.

The score card is a godsend.

How does the game play?

Well, it is a trick-taking game. If you don’t like card games like that, then this one won’t change your mind.

For those who do like card games like this, or if you haven’t tried one, The Fox in the Forest will give you all of those warm shivers that good games create in us. There are definitely some tactical decisions required. How do you get a lot of tricks but not too many? You have a weak hand, but how do you ensure that you only take three tricks, making your opponent take at least ten?

Maybe you don’t want to play that trump card and take that trick?

This push and pull, making sure you don’t push or pull too hard really makes this game intriguing and fun. You always have to gauge just what you can do with your hand, and whether you want to do things like change the decree card or the like.

And getting a treasure in a trick you win, giving you a point immediately, really helps your decision-making too. If you have one in your hand, do you really want to win that trick? You may be giving a point to your opponent but winning the trick yourself will put you on the road to being greedy.

The Fox in the Forest is a great lunchtime game because it does only require two players and can be played in 20 minutes or so. It doesn’t take long to teach and even non-gamers shouldn’t have any trouble picking it up. They may stumble a bit on the card abilities, but they’re not that hard to figure out.

The gameplay is elegant and definitely worth your time.

I can see this game getting to the table a lot. If you’re a fan of trick-taking games and sometimes have just one partner to play with, you should definitely pick it up.

(This review was written after two plays)

5 Comments on “Review – The Fox in the Forest”