What, it’s July 13 and I haven’t posted anything in July yet?

My apologies for my tardiness.

How about some Fallout news?

I played the base Fallout boardgame at the Terminal City Tabletop Convention back in March, and it was a fun game. Went on a bit too long, but I think with more plays it would be very great and cut down on the time issue.

Being a big fan of the video game helps.

Fantasy Flight Games has announced a new expansion for the game coming out in the fourth quarter of 2018!

“The New California expansion brings all-new challenges to the irradiated landscape inspired by Bethesda’s blockbuster video game series, inviting you cover even more ground when you return to the four scenarios you experienced in Fallout: The Board Game or enter sunny New California in two brand-new scenarios. While you’re on these adventures, you can visit some of the most memorable locations from throughout the Fallout series, plumbing the depths of The Hole, breaking into the Lost Hills Bunker, or venturing into the imposing Cathedral.”

The expansion will come with 12 new map tiles, 5 new Survivors to play as, and a bunch of new monsters and characters to meet (and I’m sure there will be Deathclaws and such too, of course).

One of the scenarios is even cooperative, which will add some interesting twists to the whole thing. 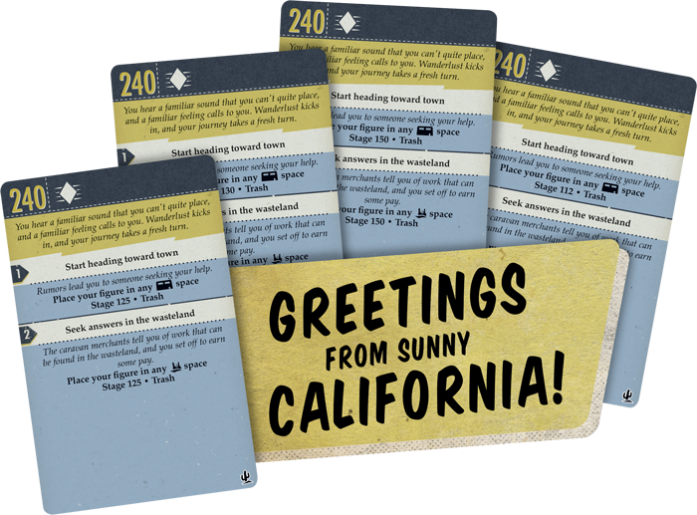 Finally, the expansion will have “multiple unique copies of individual cards,” which will let you add variety to the game because while the cards themselves will be the same, each copy will lead to different cards. Since you only seed one copy of the card into the deck for your scenario, the next time you play it could be completely different.

I’d really be interested in trying Fallout again, and this expansion seems even more exciting. I never played the original Fallout games (I started with Fallout 3, which the boardgame base game covered), so this would be even more interesting.

Look for it toward the end of 2018, and it is available for pre-order if you’re really chomping at the bit (but don’t chomp too hard. That dental work is expensive!)

3 Comments on “New Expansion for Fallout: the Boardgame Coming”