It’s been almost three years in the making, but I almost hit 300 games played since I started recording plays and I thought it would be a great idea to give you what my top 25 games played are.

Thanks to Pub Meeple for the marvelous (if extremely time-consuming) ranking engine! It took 2050 comparisons and about 2 hours of swiping right or left (it’s like Tinder for your boardgame collection if Tinder had a “which person would you rather meet?” comparison function) but I broke them all down.

Just a note before you get outraged. There are tons and tons of games out there. I’ve played 295 of them (as of the ranking). There are some “classics” that are not on there because I’ve never played them. No Blood Rage or Rising Sun, or even Gloomhaven.

Also keep in mind that many of these I’ve only played once. Thus, subsequent plays may affect how I feel about them. These are not reviews or based on some kind of objective value.

These are just the games that appeal to me the most.

Hopefully you’ll find this list interesting. Let me know what you think or what your rankings are like in the comments!

This Feld classic couldn’t help but be on the list.

In Castles of Burgundy, you are an aristocrat in medieval Burgundy (France) trying to build an impressive little princedom by drafting tiles onto your player board.

Each turn you roll your dice and you can then use those dice to either take tiles from the main board into your area or place them onto an appropriate hex on your board.

As with most Feld games, almost everything you do gives you points or helps build to you getting points. You get points for completing each coloured area on your map and some tiles give you points just for placing them.

There’s a reason the entry for “point salad” in the dictionary has Feld’s picture on it (Editor – Dave doesn’t get that dictionaries don’t have multi-word entries like that, but just humor him).

Yes, I get it. The components are cheap and really drab (I almost fell asleep posting that picture). Lots of brown and dark colours are boring.

The tiles are wafer thin too. (at least they won’t make you explode if you eat them, though they might make you ill…).

I don’t care. I love this game so much that I have two games ongoing on Boiteajeux.net at all times. I’ve played probably at least 80 times online, but only a few on the table.

It’s relatively simple, an elegant design with some dice rolling but lots of ways to mitigate that (either with your workers or by placing technology tiles that let you adjust dice for placing/picking up from adjacent areas).

Now if Jim would just let me win one more of our online games, my journey would be complete!

This game is easily in the top 25 (even if it is barely there). 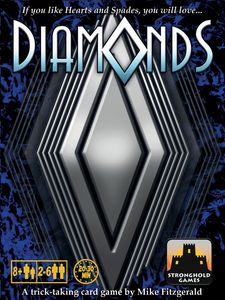 Diamonds is one of the best pure card games I’ve played, at least in the trick-taking genre (meaning everyone plays a card, following the suit played by the lead player unless you don’t have any).

If you’ve played Hearts or Spades at all, you are familiar with the basic concept.

What drives Diamonds way above any of those other games is the diamond collection aspect of it.

Each suit has its own action that will help you collect the plastic diamonds that are in the game. If you win a trick, you get to do the action of that suit. If you can’t follow the lead suit when you are playing, then you can play any card you want and you get to do that suit’s action. 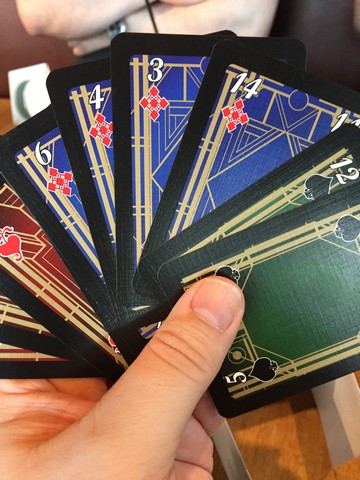 The worst part of most trick-taking games is when you can’t follow suit and nothing you play matters (other than maybe playing the trump suit to win the trick or shorting yourself of another suit).

Diamonds gives that card play meaning, and it is great.

I did a full review of the game, so check that out for more detail, but it’s certainly earned its spot in the Top 25.

This is the game that started it all, at least for me. Being asked to fill in for somebody who had to leave was my break into the gaming world, and I’m all the better for it (and you are too, since you now get to read this blog!) (Editor – wow, that head is getting quite big, isn’t it?).

Merchant of Venus is a pick-up and deliver game where you are traveling the galaxy trying to discover where various races make their home, and then trading with them. It’s all about the money. (The fact that you play as one of the factions and thus have a “home” system, yet you don’t know where it is located is actually kind of hilarious)

You have your ship, you buy goods at one port and sell them at other ports. You can build factories, you can build orbiting bases to sell goods more efficiently (as well as perhaps getting a skim off the top as well) and are trying to get to the agreed amount of cash before any other player.

Merchant of Venus can be a long game, depending on what you decide is the goal. We usually say $2000, so it becomes about a 3-hour game. It is also possible to get yourself into a situation where you are basically doing nothing and have no chance to win (my 2nd play was like that). You have to be careful to watch your finances and make sure you have enough money to do some stuff.

Maybe it’s nostalgia that has it in my top 25, but I just enjoy the hell out of this one. It’s Eric Summerer’s #1, so that must count for something too!

I think it’s the combination of trading and exploration that does it for me, though. I actually find myself a little bit disappointed when we’ve discovered the last race. That makes it a pure economic game now, which isn’t quite as fun.

But it’s still a blast. 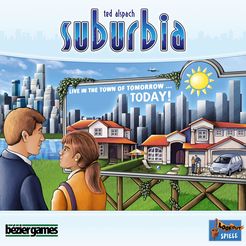 This is a classic game from Ted Alspach which I think was one of the first games I owned. I know it’s one of the games I used to play with my wife a lot, as well as taking it out to game days.

I actually hadn’t played it since 2016 until I got two plays in for 2018. The second one was trying the 5-Star expansion again, and we discovered that we still didn’t like it.

But the base game? And with the Suburbia Inc. expansion?

This game is pure awesome sauce.

Each player is building a suburb that’s trying to compete with other suburbs to get the most population (points). You do this by drafting (and paying for, as it is a real estate market) various location tiles to put into your suburb. This could be a Shopping Mall, a Housing Project, or maybe a Factory?

You are trying to build up your income so you can buy more expensive tiles but also your reputation because that’s the number of population (points) you get at the end of each turn.

One thing I really like about this game is how the scoring works, with the red lines that you can cross on the population board. For each red line you cross, you lose one reputation and income (the more crowded you get, the more your reputation suffers).

Thus, you have to strategize just when you want to be building up all of your money and when you want to start building that population. If early in the game you get a bunch of green tiles that do nothing but increase your population, you’ll soon be in a bad situation because your income will be negligible and you won’t be able to afford anything.

Sure, the art is drab. Many of the tiles in the game are interactive and depend on what your opponents have as well, which can make it difficult to count up things. It’s a bit fiddly how you have to set up the tiles. (All of these things, except possibly the setup, have been addressed in the new Suburbia Collectors Edition which I did ultimately decide to back on Kickstarter).

Yes, the 5-Star expansion really dilutes the tile set to a horrible degree (there are a bunch of restaurants in the expansion, which is good, but airports are virtually useless now) and the “whoever’s ahead on the Star Track breaks all goal ties” rule really breaks the game in my opinion, but we’re talking about the base game and the base game is excellent.

Rounding out the first part of this Top 25 list is a really interesting worker placement game about 1570 China, where corruption was a capital offense so government agencies got around that by exchanging gifts with people. If the person who wanted you to do something for them gave you a more valuable gift than what you gave them, that’s just what sometimes happens.

The game takes place over four days, and you’ll be sending your servants out to various parts of the board to exchange gifts with the local official there in order to take an action.  This can be anything from traveling around China to collect taxes for the emperor, you can help build the Great Wall, or maybe visit the Temple and work towards getting an audience with the Emperor, and so much more.

Most things will earn you some kind of points, though it’s not up to Feldian levels of course. I managed to win my first game, which is definitely not why it’s in my Top 25 (Editor – Sure it isn’t). I haven’t had the chance to play it again, but I really want to.

The artwork is gorgeous, the cards are really nice. I love the gift-giving concept (you can give a lower gift, but you have to send a couple of your servants to “sweeten the pot” so to speak (not in a cannibalistic way)). The decisions that you have to make are really interesting. You can ignore certain parts of it and still win, but you don’t want to be a dabbler. Concentrate on a couple of things and you can do well (Jade is a set collection part of the game, but I only received one point from Jade).

I really need to play this one again.

And there you have it! The first post in the Top 25 Games Played of All Time by me.

What do you think of some of these? Have you played them?