I was really excited to see the news that a 2-player version of the wonderful Gil Hova design The Networks was going to be released and be on Kickstarter in January.

I was so excited that I announced the news as soon as I heard it!

Thus, it makes me very happy to announce that the campaign is now live!

Let’s blurb this thing from the campaign page:

Shows go onto one of your time slots, giving you Ratings Points and Viewers there. Stars go on Shows, adding to that time slot’s Ratings Points. You’ll spend your Ads to buy powerful Network Cards that give you various abilities.” 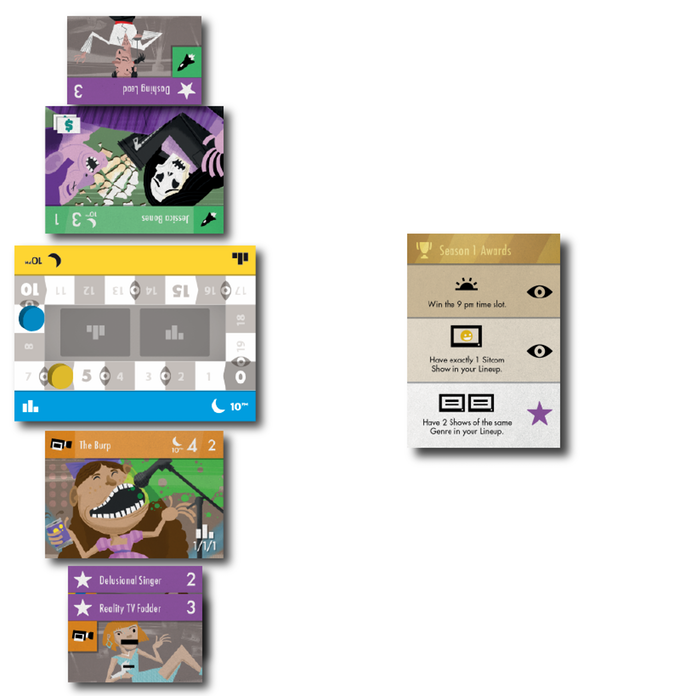 I like how viewers are actually tokens that you file away in your bank (well, it looks like a bank to me) but you’re fighting over viewers in each time slot because whoever has the most gets a bonus.

It really is a duel!

Thus, those scoreboards you see in the picture are actually season-to-season ones. You don’t keep track of your total on the board. It’s a secret.

The $30,000 stretch goal is an Executives module, which also looks nice. Asymmetrical powers for the win!

Congratulations to Gil on yet another successful campaign (if it’s this close to the goal already, I’m just going to assume that it’s going to blow way past it).

The cost of the pledge to just get the game is $25 and shipping gets added to it when you pledge (it doesn’t get added later). Unfortunately that shipping for me to Canada is $14, so this is going to be a $39 game for me (approximately $51 CDN right now, anyway).

But it’s worth it!

Gil has never led me wrong yet.

Check this campaign out and see what you think. Maybe you could use a duel in your future as well.

If so, why not make it a Networks one?

The campaign closes on February 14, so hurry!