Let’s say you buy a game from somewhere. Anywhere, really. A friendly local game store, or Amazon, or even from a friend.

Then you open up the game and…oh my, there’s a piece missing! Or malformed! Or it broke when you tried to punch it out of the cardboard!

What do you do?

Usually, you contact the game company and they’ll just send you the piece or pieces.

Well…not any more, at least where Asmodee USA is concerned. 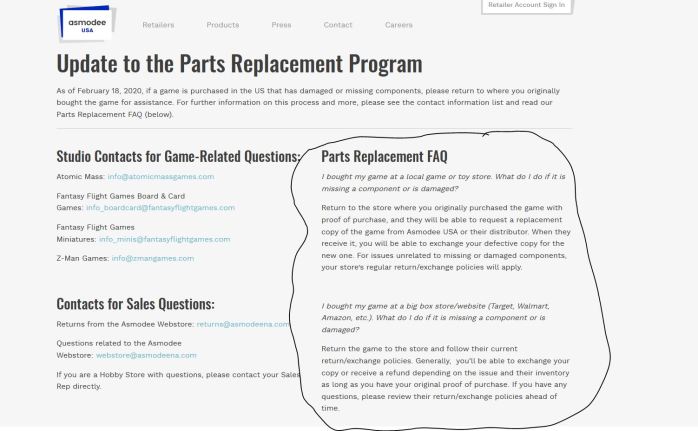 They are implementing a new Parts Replacement Policy that is…shall we say, not as friendly as everybody else.

The basics (in case you can’t read that screen shot, my apologies if you can’t) are that instead of contacting Asmodee and getting the part replaced, you now have to ask the store to request a replacement from Asmodee. Asmodee will then ship them a new copy of it and you can exchange it for the defective copy.

For online retailers and web sites, you have to deal directly with the website/retailer and either get a refund or a replacement.

Well, guess who gets to go through the entire exchange process from another country.

If you bought a game at a local game store while you were on vacation, then you’re really out of luck unless you can get back there.

You might also ask “Dave, isn’t this what most people who buy stuff have to go through anyway? What’s the problem?”

And that is the $5 question! (you try giving out prize money when you don’t have any blog income).

We gamers have been kind of spoiled by the service we get from game companies.

I was missing a blue urn (or whatever they’re called) from my copy of Paladins of the West Kingdom which I discovered in January (after receiving it in September). I emailed Shem Philips at Garphill Games and got an immediate email that one would be going out the next day. I got it 2-3 weeks later.

Granted, this was a Kickstarter copy so they should have a bit more quality control, but this was 4 months after fulfillment (I usually inventory everything when I open the box but somehow that got missed).

I was really impressed by that.

And dealings with other companies where a piece is missing here or there have been answered the same way.

So for Asmodee USA to go this route is really interesting.

They are a behemoth in the board game industry, owning so many game publishers that sometimes you have to wonder if it’s easier to name one that they don’t own than to name one they do.

I believe they were one of the first to implement MAPP (Minimum Advertised Price Policy) where retailers couldn’t advertise any of there games for a price below what the MAPP was set at and others soon followed suit.

Will this be the same way?

I have to love how they deal with those of you who buy or trade games with friends:

“I bought my copy from a friend or an online consumer-to-consumer market. What do I do if it is missing a component or is damaged?

We encourage you to make sure that all components of a game are present and intact before purchasing a game second hand. Unfortunately, we cannot offer replacements for products that were not purchased directly from our USA retail partners or webstores.”

I can see a lot of people fussing with these games at the local math trade!

At least not without cost.

This may be the harbinger of we gamers having to get with the times.

Or it could just be Asmodee being Asmodee.

What do you think of all this?