Twilight Struggle: Red Sea – Conflict in the Horn of Africa – From GMT Games

We may all be stuck at home, either working from home (hopefully) or quarantined (if so, I hope you are doing well and stay safe), but business goes on, especially in the gaming world.

Though GMT Games is following the California order to stay home and close everything for now, that doesn’t stop new announcements from still happening all the time, and in this age of social distancing, what can be better than playing a boardgame or two with your family and loved ones?

Yesterday, GMT Games put out their monthly update that includes their latest P500 game additions (once the game hits 500 orders, it goes into the pipeline for production) and I was stunned to see a marvelous-sounding game show up.

(Ok, I wasn’t *that* stunned as I heard about it on Twitter a couple of weeks ago, but still…stunned).

Grant over at the excellent Players’ Aid blog usually does a post about the latest update at some point shortly after it comes out, but I had to get this one out quickly.

What was this news that made my jaw drop?

Called (and I will not be typing this whole thing every time I talk about it) Twilight Struggle: Red Sea – Conflict in the Horn of Africa, this game is the Cold War but confined to, well, the Red Sea area and the Horn of Africa (funny how that works). 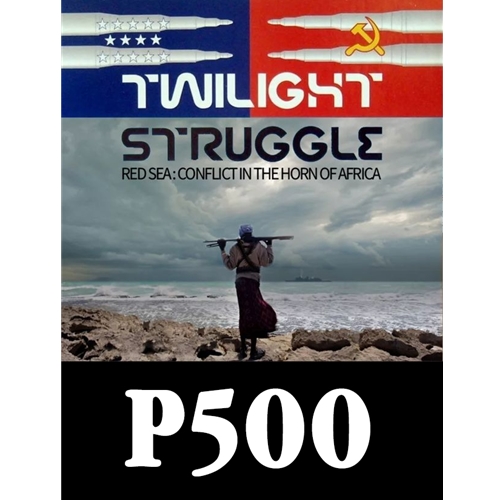 This would be the fourth in GMT’s Lunchtime Games series (after the wonderful Fort Sumter, the long-awaited Flashpoint: South China Sea and the recently added Red Flag Over Paris). The concept of making games specifically for play at lunch (rather than just “oh, this game only takes 45 minutes, so we can play it at lunch) is very admirable.

Twilight Struggle is a 2-player Card-Driven-Game that encompasses the entire Cold War struggle between the USSR and the US. It can take up to 3 hours and I have never played it on the table (though I have many crushing defeats from Clio at Clio’s Board Games on the app version).

Twilight Struggle: Red Sea promises to condense all of that into a smaller global footprint as well as a much shorter time (the GMT page says 35 minutes for the base game).

Let’s blurb this thing (make my life a lot easier).

“Twilight Struggle: Red Sea – Conflict in the Horn of Africa is a two-player, stand-alone, card-driven game that builds on the award-winning Twilight Struggle. The year is 1974, and the Soviet Union and the United States have been locked in a life-or-death struggle across the globe. As so often happened during the Cold War, a relatively obscure region of the world suddenly took center stage. Emperor Haile Selassie I of Ethiopia, a bedrock U.S. ally in Africa, had grown old and increasingly dictatorial. In 1974, a group of young Marxist officers staged a coup and took hold of the the reins of power. This revolutionary leadership sparked a chain of events that upset the regional balance of power and unleashed all the familiar elements of Cold War competition in the Horn of Africa.”

One of the cool things about this game is that it uses a very similar system to its parent game, so it could be a good way to introduce it to unsuspecting friends.

If you want a bit of a longer game, or if you want to enhance your Twilight Struggle game even more, you can mix-and-match some of the cards between the two games.

You know what’s even cooler? Something I’ve never seen from GMT, though I maybe haven’t been buying the right games.

It comes with 50 card sleeves for the 48 cards in the game.

Since when does GMT provide sleeves for its games?

Anyway, this game is currently at 366 orders (and may have even hit the 500 level by the time this posts), so it doesn’t need help.

But I still encourage you to check it out.

Twilight Struggle is an incredibly tense game where you succeed by mitigating the cards you’re forced to play over the long game.

This game is short, but promises to hold that same tension, and I can’t wait to get it in my hands.

Check out Twilight Struggle: Red Sea today and see what you think?

You know you want to.

11 Comments on “Twilight Struggle: Red Sea – Conflict in the Horn of Africa – From GMT Games”