As we move into April, the self-isolation continues.

For some people, that was their normal behaviour anyway, but it’s still hard to be sequestered away from seeing pretty much anybody.

I’ve been working from home since March 16 and it’s been quite the adjustment.

Even more so has been the lack of game days. Much of my gaming was at work on lunch, while the rest of it was on our Sunday game days that have been cancelled for the foreseeable future.

Hence, this is going to be a thin post.

Not as thin as the rationales behind some of the Cult of the New to Me leadership revolts!

Also, I should probably let you know that this may be the last “New to Me” games post in a while, because my source of these games is totally dry until we can get back to socializing.

So, without further adieu (all of my adieu is now in Evidence after Mr. Walton’s murder anyway), let’s begin!

Have you ever played Clue? I’m sure you have, at least when you were a kid (unless you’re too young for that, anyway, and if you are, then I’m sorry that most of my pop culture references probably fly right over your head)

Anyway, Awkward Guests is a game that takes Clue and then ramps it up to 11, making a “gamer’s game” out of the whole thing.

Mr. Walton has been murdered, and it’s up to you to figure out who did it, how they did it, (where has already been determined, because you know, where you find the body is probably where it happened!) and most importantly, why they did it.

The game is run through an app, so no two games will ever be the same.

There are a bunch of cards that refer to the suspects, motives, and weapons. When you start the app, it will tell you what numbered cards to take out of the deck. Unless you’ve played it a bunch and have memorized the card numbers, this means you won’t know what’s been taken out.

The rest of them will then pertain to the actual murder.

Each player is given a player sheet where they will keep track of the clues they’ve been given.

They’ll also have some cards in their hand. These will be everything from “Stanley Smithe claims he was with Greg Gaffney at the time of the murder” to “The Police report states that Greg Gaffney’s motive “Stolen Recipe” was not the crime motive.”

If the police report, the autopsy, or the mansion staff say something, you know that it’s true and you can eliminate it.

If the suspects claim something, they could be lying.

Once players have their beginning cards, they mark down all of the evidence those cards give on their player sheet.

The round starts with the active player stating that they are looking for cards referring to two different things. They can be suspects or rooms in the mansion. 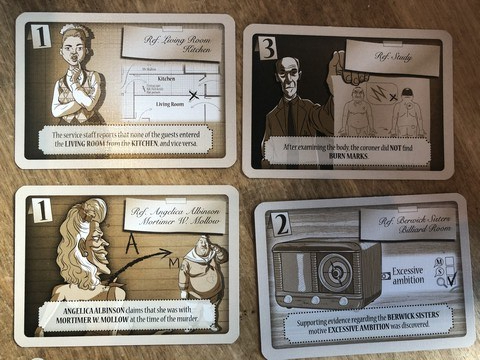 The cards have point values showing on them. Each other player will say that they have, for example, three points of cards about one of the things the player asked for.

Once everybody has done that, the active player decides which offers to take. They have to then give the other player cards with the same total point value as what was offered. These can be any cards. They don’t have to reference what was asked for.

Once cards are exchanged, players mark the new evidence down on their sheet.

If nobody offers anything, the active player can then just draw 3 cards from the top of the deck.

Once each player has been the active player, the round is over. Players then vote on whether or not they want to try and solve the murder based on the evidence they have collected.

Those who voted to solve the puzzle will, in player order, type their solution into the app.

The app will then tell them if they’ve solved the murder or not.

If not, they can’t guess after the next round.

If nobody guesses correctly, then players discard cards down to three in their hand and the next round begins. Then new cards are dealt until each player has 6 cards again.

Record your new evidence, and then repeat the same round procedure until somebody solves the murder.

One of the things that makes Awkward Guests a little more complicated is that you have to be able to trace the suspect’s path through a room where they would pick up the weapon that they used in the murder. So if the staff says nobody went from the Kitchen to the Living Room, you have to make sure your suspect wouldn’t have had to use that path in order to pick up the weapon of opportunity.

This was a really fun game, though we did a few things wrong in our play which kind of marred the experience.

We played where there was a solution phase after each player went, which makes being excluded from the next one for guessing wrong not much of an issue. When you have to go two full rounds before you can guess again? That’s a major penalty.

Overall, though, I love the card play and how you exchange cards and to try and get more evidence.

It is up to you how much you offer in the Exchange phase. However, if you don’t offer anything, you won’t be getting any new evidence back. You have to kind of balance what you’re offering versus what you might be getting.

It’s certainly a bit more complex than Clue and that’s what makes it interesting to those who have graduated above those basic types of games.

The app is very handy, though you can play it without. I don’t know if I would want to, though, as it seems kind of fiddly to do that. The app makes everything a breeze!

Definitely give this one a try if you have any interest in this type of game. It’s a fun, relatively short, and interesting game to give that deductive reasoning part of your brain something to do.

I’ve been waiting for this expansion to one of my favourite games for quite a while now.

The Age of the Artisans expansion adds a few things to the base game, but it really doesn’t add much complexity.

In fact, we had a new player in our game and she picked it up just fine (she came in 3rd out of 4 players, but she was only 9 points behind the leader).

First, the expansion adds material for a sixth player. I have no idea how well that would play (that’s a lot of players!), but it’s cool that it does.

The main things that the expansion adds are tools and adornments.

These are added to your buildings and apprentices to make them more powerful or to give you an extra one-time immediate benefit.

Doing this (for the most part, except for an additional way to craft a tool) involves adding another one of your precious worker meeples to the Guild Hall, where they will forever lay in state because they were sacrificed for the greater good.

You do this by placing the worker on top of one of your workers that’s already there. Thus, if you haven’t built anything yet, you can’t get an adornment (which makes sense, since you don’t have a building to put it on!).

You also can’t get a tool until you’ve built something, unless you do the new Black Market action that lets you craft a tool without losing a worker to the Guild Hall.

Adornments are added to your buildings and they will give you a one-time benefit that could give you some cool stuff. They also add to the number of victory points that your building is worth.

Tools make your apprentices more powerful, giving them an extra ability that could get you even more of a resource or the ability to do something during a Black Market reset or whatever.

You can make one of your apprentices really powerful depending on the tool you assign to them.

Each building or apprentice can only take one adornment or tool, so you have to make sure you pick something that will help you.

Tools also give end game scoring based on how many tools you ultimately crafted.

It all seems like a small thing, but these give you so many options that you didn’t have before that it makes an already interesting game that much better.

Finally, the expansion gives you the aforementioned Artisan worker, which is an additional worker to your basic 20.

On the turn it is placed, your Artisan counts as two workers on the space you put it. Sometimes that doesn’t matter (if you used it at the Tax Stand or in the Black Market, but then I’m wondering why the hell you used it in that space anyway?), but it does make a difference at most other spots on the board (it can’t be placed in the Guild Hall).

This only is in effect on the turn you place the Artisan. On subsequent turns, and for any other purpose, it still only counts as one worker.

Walaric’s Artisan counts as 3 workers on the turn it’s placed. He also gets a tool to start the game with and he’s very virtuous.

Gisela is also quite virtuous. Any time she crafts a tool she also gets the adornment immediate bonus, which can be very powerful.

All in all, I loved this expansion. It adds so much, but yet not that much in terms of complexity or game length (a little bit of game length at first because you’re spending time looking at all of your options). Yes, the game could take a bit longer because you are potentially putting more workers in the Guild Hall, but overall I don’t think it would be that much.

Once this damned social isolation is over, I will be wanting to play this one a lot.

So what new games have you been able to play last month? Either before the lockdown or maybe virtually once we all had to stay inside?

What do you think of these two games?

Let me know in the comments!