Expansion Review – Smash Up: Oops, You Did It Again

What other game other than Smash Up would allow you to see what would happen if such varied things such as Cowboys, Monsters, and Teddy Bears got into a big fight?

I think that’s one of the things I love about the game, even if sometimes the factions don’t go together that well.

While Smash Up did not quite make my Top 25 Games Played of All Time list, it was quite close (#27) and I’d have to say that I’ve played it the most out of any game that’s not a quick dice-rolling game.

And had a blast with it as well. 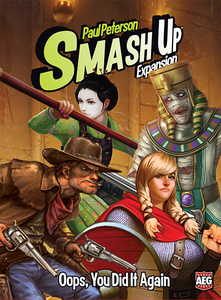 The Oops, You Did It Again expansion (the latest, and yay I got this review in under the shadow of the impending next release!) is a great new addition to the franchise.

Alderac Entertainment Group opened the door again to letting fans vote on which factions would be included in this expansion, and let’s just say the fans went a bit nuts. But that obviously inspired designer Paul Peterson and the rest of the AEG group who work on the factions because they took what the fans wanted and turned in some brilliant work.

As with previous expansion reviews, I’m not going to go into how Smash Up works. You can go see the original review for that.

Oops, You Did It Again brings four new factions into the Smash Up universe, and all of them bring some unique abilities as well as adding a couple of new mechanics to the game.

Let’s start with those ornery Cowboys, as they’re already here with guns out.

Cowboys bring one of the new mechanics, Dueling.

For example, when the Gunfighter is played on a base, the player can decide to duel another minion at the same base.

Duels are basically a comparison of minion power. Each player, beginning with the initiator of the duel, gets to play one card face down if they want to.

Once cards are placed, they are turned over beginning with the initiator. If a minion was played, then it goes back to the player’s hand.

If an action was played, the action goes into effect (even if the action has nothing to do with the dueling minions).

Or it could just be an action to play on another base. In other words, you could use this as a way to get a free action play.

Once both cards are revealed and any actions are taken, the minions’ strengths are compared.

The strongest minion wins. The dueling card says what happens to the winner and loser (many times the loser is destroyed, but sometimes something else happens).

The Cowboys are a fun faction, but the dueling mechanic that they introduce can really lengthen the game until you get used to it. This is the first time (that I’ve seen, of course, as one of the previous expansions may have had something) that an expansion has added a mechanic that’s more than just card play and adding power-ups. You have to really think about whether you want to duel, and who. And then decide if you want to play a card. If you do, will it be a bluff and play a minion, or do you want to get an action out there? Or do you want to try to win the duel even though you’re vastly overpowered? Did you want to waste that +3 power in what might be a losing cause?

As we got used to it, it became a fun little addition to the game that I really liked.

The artwork is gorgeous, as usual, really evoking that Old West theme. Grizzled cowboys, desert mesas, and all that good stuff.

A fun faction, though a bit one-dimensional (they are all about the dueling).

Samurai have a little dueling too, but they are more about power-ups and going honourably to their deaths while helping their fellow minions.

Honor the Fallen played on a base means that every time one of your minions at that base goes to the discard pile, you draw a card.

If Bushi goes to the discard pile and you’ve powered him up at least once, you get a victory point. That ain’t nothing, and the Samurai do have a number of cards that will at least temporarily power up minions. Play one of those “get +2 until the end of the turn” cards on the turn that you break the base, and you not only get VP for the base, you also get 1 VP for Bushi!

It can make not winning the base a bit easier to bear.

Samurai also have a few dueling cards, but not nearly as many as the Cowboys.

However, it’s almost better for the Samurai because most of the time they get a good effect even if they lose (because they’re going to the discard pile).

I really liked this faction, though I’m not as in love with the artwork on the cards as I am with the Cowboys or other factions. It’s not bad (it’s no Shapeshifters), but it feels a bit muddied.

I really like the neat twist of having great effects when cards are discarded. Drawing more cards, other minions getting stronger, they are really a lot of fun.

Ancient Egyptians add another new mechanic: burying (because they were all about the tombs and such).

Burying only happens when a card says it does, but at the beginning of your turn, you can uncover one card. Other cards may let you uncover more than that.

This can be quite powerful if you have something like Lost Knowledge above, which can be played before a base scores. Bury a powerful minion at a base with this card in your hand, and you can unbury it to add to your strength before it actually scores.

The Pharaoh will let you uncover a card at its base to do the same thing, which is nice.

And those Mummies! Put them down one place and they show up someplace else. One game, I had three Mummies at a base, so when the base scored, I spread them out to the other three bases.

It was really cool.

Other actions and minions will get additional power if cards are buried at their bases, so the burying mechanic is very prevalent for this faction.

I like how the Ancient Egyptians work, but I didn’t care for them as much as the other three. The burying mechanic is neat, but it doesn’t always go well with other factions (I guess that could be said of a lot of faction combinations in this game, though).

The artwork is nice and evocative of that ancient Egypt feel, and I also love how it incorporates other expansions on some of the cards (like Lost Knowledge using the Explorers faction).

And the mummy wearing the T-shirt on Seal the Tomb is priceless!

Finally, we get to my favourite faction in this game but one that complicates the tear-down after you’ve finished the game considerably.

The Vikings are all about stealing cards from other players.

They’re not like the Ignobles faction where it’s about taking and retrieving control of minions. It’s about outright raiding and pillaging (i.e. theft) of cards.

The Shield Maiden reveals the top card of a player’s deck. If it’s an action or a minion of power 3 or less, she places that card into your hand.

She steals any action, or most of your minions (not the really powerful ones, though).

That Valkyrie, though, can be really devastating. A base just scored using one of your opponents’ 5-power minion and it goes to the discard pile.

Play Valkyrie and boom! That 5-power minion is yours.

Pillage takes a random card from a player’s hand, so it could be really good or maybe not so good. Who knows?

Vikings also have a number of cards where you place cards from your hand on top of your deck in order to power up minions. This can be very effective when a base is about to score.

The mechanics for the Viking faction are a lot of fun, though you have to be sure to be clear who controls a card when it’s out on the bases. There can be many combinations of cards out there and if you’re not careful, it could be hard to tell who controls what (this is mainly about base actions and not minions, as minion placement is pretty standard).

And clean-up can be a bitch (definitely count your cards after you’ve got them all together).

I love the artwork on the Vikings. Lots of fighting, the dark colours set the mood, and it just looks like a lot of fun.

I’ve seen a comment or two about the Valkyrie card and how it doesn’t fit into the Vikings faction. Not because Vikings didn’t worship Norse gods, but because the rest of the cards are about real historical Vikings and the Valkyrie is from their religion.

I don’t really have a problem with that. I think it may be more of a problem if they ever do a Norse faction (Thor’s Hammer, etc), though, as that card really should go into that faction.

But for now, I just see it as another aspect of Viking culture.

The bases are all pretty basic, giving everybody a taste of the host faction’s mechanic.

The So-So Corral (great name) lets anybody duel anybody else. The Pyramids let anybody bury a card. Drakkar giving the Shield Maiden’s card-stealing ability to anybody when they play a minion there.

I also notice the base-breaking number on some of these. The Rockstars would love these! (and who could pass up the chance to bury Elvis?)

As bases go, they’re pretty standard. Nothing that interesting about them other than spreading the new mechanics around.

They’re still nice, though, and the artwork is great!

All in all, while this isn’t my favourite expansion, it ranks pretty high up there.

The factions are interesting and I like the new mechanics (though they do add to the play time initially as you get used to them).

The faction designers took what the fans requested and did a stand-up job of making them fun to play.

Check these out if you get a chance.

Other Smash Up Reviews:

18 Comments on “Expansion Review – Smash Up: Oops, You Did It Again”